Symphony is a smartphone company with its headquarters in Bangladesh, as I already explained. The Edison Group launched the business back in 2008. At first, it produced low-cost feature phones. But after a few years, the company was able to successfully add Android tablets and smartphones to its lineup of goods.

Its first smartphone was the Symphony Xplorer W68. The gadget came pre-installed with Android Jelly Bean when it was introduced in 2013. (4.1). Symphony is well-known in Bangladesh for selling high-quality smartphones at reasonable prices.

Initially, Sympho Tech served as Symphony’s sole authorized distributor when it first debuted on the Nepali market in 2020. Apex Group, however, has recently been chosen by the business as its second distributor. The batteries are also covered by a one-year warranty from Sympho Tech.

The Symphony i32 is a budget phone in this case. Its back is made of plastic, and it is covered in polygonal marks of various sizes and forms. A fingerprint reader is also housed in the panel.

The 6.52-inch HD+ display on the front of the i32 has a waterdrop notch for the 5MP selfie camera. A dual-camera arrangement with an 8MP primary and a 0.08MP secondary camera is present on the back of the device.

The phone has an unidentified quad-core processor inside with a 1.3GHz maximum clock speed. Mali T820 manages the visuals. We assume it is running a Unisoc chipset given the GPU. The i32 will only be available in a single 1GB RAM + 16GB storage option moving forward. The phone has a 4,000mAh battery to power it.

Symphony i32 Price in Nepal

The Atom II is the newest Symphony phone that will shortly go on sale in Nepal. The back of the phone has a sun-ray design and holds the speaker grill, a fingerprint scanner, and a camera bump that is square in shape.

The 6.52-inch HD+ panel on the Symphony Atom II is identical to that on the i32. The dual-rear camera configuration is also unchanged. The front-facing selfie camera, however, now features an 8MP sensor.

A 1.6GHz processor and PowerVR IMG GE8322 GPU power the phone. The Atom II has a 4,000mAh battery as well. The phone has 2GB RAM and 32GB of internal storage in a single memory configuration.

The display of the Symphony Z18 is a 6.52-inch HD+ IPS in-cell screen. It is driven by an octa-core chipset with an unidentified clock speed of 1.8GHz. There is only one memory configuration for the phone, 2GB+32GB. A 13MP primary camera and a 2MP lens are part of the camera configuration on the back of the device. Symphony sports a 5MP selfie camera on the front. There is a 5000mAh battery within the phone.

The 6.52-inch display on the Symphony Z28 has a 1600 x 720-pixel resolution. The waterdrop notch on it is where the 8MP front-facing camera is located. The phone has an unidentified octa-core processor inside. IMG PowerVR GE8320 handles the graphic processing. The phone has 32GB of internal storage and 3GB of RAM as far as memory is concerned. The latter can be increased using an external MicroSD card by up to 128GB.

A 13MP primary camera serves as the focal point of the trio of cameras on the rear. A 2MP portrait lens and a 5MP ultrawide lens are attached to it. Inside the pill-shaped camera module, the three lenses are placed vertically. Under the camera arrangement, there is an LED flashlight. Up to 28 hours of talk time are promised by the Symphony Z28’s 4,000mAh Li-Po battery. The gadget has 4G capability and comes with Android 10. The gadget also has a fingerprint reader on the back.

The 8MP front camera is housed in a V-shaped notch on the Symphony Z30 Pro’s 6.52-inch HD+ display. The phone has an Helio A25 SoC with a 1.8GHz clock speed. IMG PowerVR GE83220 is in charge of the visuals. The phone has 64GB of internal storage and 4GB of RAM. An external microSD card can be used to increase internal Storage.

A 13MP primary camera, a 5MP ultra-wide camera, and a 2MP portrait camera make up the trio of cameras on the back of the device. The phone is powered by a huge 5,000mAh battery. The device’s rear has a fingerprint sensor installed on it.

The 6.52-inch HD+ screen on the Symphony Z32 has a V-shaped notch for the 5MP front-facing camera. The 13MP + 2MP dual-camera array is housed in a pills-shaped module on the back of the device.

An octa-core processor with a top clock speed of 1.6GHz is present in the phone. It comes with a memory configuration of 3GB plus 32GB. The entire system is powered by a 5,000mAh battery.

Moving on, the Symphony Z33’s back likewise features a sun-ray pattern. The dual-camera configuration in this instance, however, consists of a 13MP primary and a 2MP secondary sensor and is housed in a rectangular camera bump. The device’s length through the module is also divided by a vertical stripe. A fingerprint reader and a speaker grill are also located on the rear surface.

There is the same 6.52-inch HD+ panel on the front. It has an 8MP selfie camera hidden under its waterdrop notch. It has an octa-core CPU with a maximum clock speed of 1.8GHz that is built using 12nm technology. The phone’s 5,000mAh battery provides power.

The company’s Symphony Z40 is its greatest product for the Nepalese market. It has a 6.55-inch HD+ display. The 13MP selfie camera is enclosed by the punch hole on the left. Another 13MP sensor is located at the back. Alongside it is a 2MP portrait sensor.

The Helio P35 chipset is found inside. It has 64GB of internal storage and 4GB of RAM. The 5,000mAh battery on this phone charges using a USB-C port. 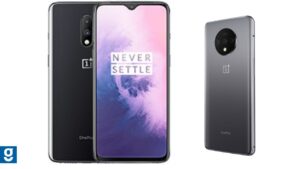 Users of the OnePlus 7 or OnePlus 7T have bad news: it’s time to upgrade